More than 60 feminist socio-legal scholars, activists and members of the legal profession worked together to produce alternative written judgments of 23 English legal cases. Although each author wrote their judgment under the same legal framework as the original case, the outcomes were often very different. Clare McGlynn and her co-editors Rosemary Hunter and Erika Rackley compiled the judgments from the project into a book, Feminist Judgments: From theory to practice, which was published in 2010. McGlynn’s own feminist judgment challenges the House of Lords decision R v A (No 2), which reduced protections for women giving evidence in rape trials. The judgment is extracted in The Guardian.

The Feminist Judgments Project has had considerable influence both within the legal profession and across wider society. Supreme Court Justice Baroness Brenda Hale cited the Project during her oral evidence to the House of Lords Consultation Committee enquiry into the Judicial Appointments Process, using it as an example of the positive role that greater diversity could have upon judicial decisions. The Feminist Judgments Project has garnered considerable media attention, including articles in the Law Society Gazette, The Lawyer and the Times Higher Education.

(2) Women in the Legal Profession

Clare McGlynn’s first book The Woman Lawyer: Making the difference was published in 1998. As the first book-le

ngth study on the representation of women in the UK legal profession, it became a key reference point in debates surrounding diversity in legal contexts. In the book, Clare McGlynn chronicles women’s experiences throughout the legal profession, from law school to the judiciary. She combines her own empirical research and statistics with personal testimonies from women legal academics, lawyers and judges. These personal testimonies include contributions from Baroness Helena Kennedy, and Baroness Brenda Hale, who is currently the only woman on the Supreme Court. Clare’s overarching theme is the need for reform within the legal profession; to introduce greater diversity and to challenge a culture in which women’s abilities and achievements are marginalised.

In her role as the vice-chairwoman

of the Young Women Lawyers Group in the 1990s, Clare McGlynn commented on equal opportunities for women lawyers in The Law Society Gazette, The Lawyer, and The Independent. 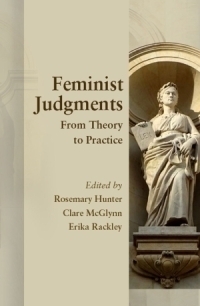