The Report was launched at a roundtable in Parliament, chaired by Maria Miller MP and with contributions from Dame Vera Baird Victims’ Commissioner, the Fawcett Society, the End Violence Against Women coalition, Women’s Aid, Rape Crisis and many MPs, police, the Law Commission and members of the House of Lords.

The Report was discussed widely across the media, including reports in the Independent, the Guardian, the Telegraph, and the Times. Read a short summary of our key points in our comment in the Conversation.

The key findings are: 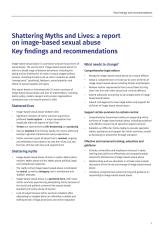 What needs to change?