July 2019: Read here our short comment in the Conversation blog summarising the findings of our report Shattering Lives and Myths, with Erika Rackley and Kelly Johnson: ‘Sexual abuse happens online, too – but current laws leave too many victims unprotected’.

To watch a clip from 5News with Folami Prehaye and myself commenting on the Government review, see blow and Folami’s tweet 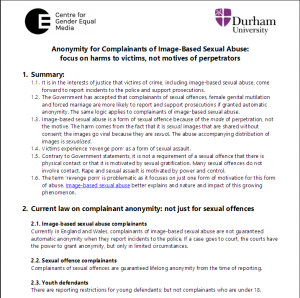 explains why image-based sexual abuse is a form of sexual offending and should be treated as such, as well as outlining why all complainants and victim-survivors require automatic anonymity when reporting a potential offence.

I gave evidence before the Scottish Parliament Justice Committee when they were debating the introduction of the Abusive Behaviour and Sexual Harm (Scotland) Act 2016.