To find out the answers to these and many similar questions, my colleague Dr Hannah Bows and I made new Freedom of Information (FOI) requests to all police forces across England and Wales. 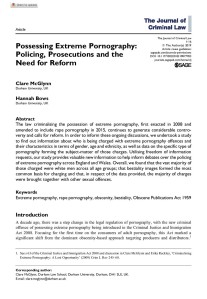 Our results have now been published in the Journal of Criminal Law. The article is free to access and download. You can also read more about the study in the Huffington Post.

These are some of our findings:

What do we know of those who are accused of possessing extreme pornography?

What types of extreme pornography are recorded and charged?

We produced a preliminary analysis of the data for the inquiry into pornography being held by the All Party Parliamentary Group on Sexual Violence. Our evidence submission is available here: APPG BowsMcGlynn FOI Evidence_